If you guessed that I’m writing this from my brand new laptop, then you’re really smart, really lucky, or you’ve been spying on me, and that’s not cool. But I finally went and dropped the money on a new computer, and, while it means not having two pennies to rub together until next payday, it’s probably a good thing. It was a needed thing, if I was going to get any sort of work done in a timely manner. I have a literary review to put out in three months. I’m going to need a computer. 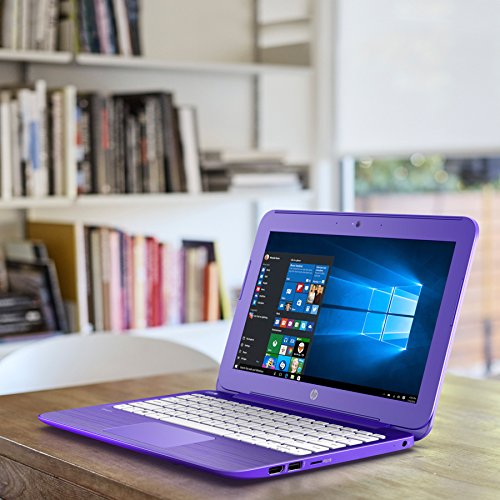 This is not my house, but this is my new computer. I wish this was my house.

The winner was an HP Stream Notebook, 11 inches, and it’s purple! It’s a seriously cute and very light machine that wasn’t even on my radar, which makes me feel more on my radar, which makes me feel even more confident that destiny brought us together. We were at Wal-Mart because we needed some steel wool for whenever we discover where the mice were getting into our apartment, and the boyfriend suggested swinging by the electronics to “see what they have,” knowing about my current conundrum. I’m pretty sure he mostly wanted to look at cheesy DVDs and scope out the portable phone charger situation (they were almost completely sold out)). The Notebook wasn’t even on display. It was tucked under the counter in some corner with a tiny little red Rollback sticker on it that I didn’t even notice. He pointed it out to me, and we immediately took to our phones, looking up reviews. It was a bit more than the Chromebook I was leaning towards, but it was still under $200, and it has Word and the capability to run Scrivener, which I would have had to forsake for a while with a Chromebook. I was waffling on it a little, we walked around a bit, and then when we returned, I decided to look at maybe one or two more reviews. When I looked down at my phone and saw the next review included “Great for writing!” in the title, I knew it was fate.

(I would have preferred Green, but Purple is a pretty sweet color, too).

Now the real trick is to figure out when is the best time to work on this bad boy. In the Time of No Computer, I had a great system down that was allowing me to be really, really productive, and I didn’t want the distraction of a machine ruining that. I’m a creature of habit, too, so I wanted it to fit in my system. But I think the solution is pretty easy. I’ve been working on my writing and reading (almost) every morning from when I wake up around 6:30 until about 10, when they boyfriend wakes up and we have breakfast and get started on our day. I don’t think my productivity will suffer too greatly if I make that last 9 to 10 hour a “Computer Hour,” time to type up a blog, answer some emails, transcribe some work, and send out some stories. Today’s the first day in trying it, which is interesting, because I slept in and only got an hour of reading/writing time. But I think I really needed the extra sleep, oh man. Also, it doesn’t have a touchscreen, which is not a big deal, but I’ve gotten so used to one with my last computer that it’s a little strange.

This gorgeous King’s Quest art is my background right now. What a perfect way to inspire me to create some incredible worlds!

So I’m happy to announce that I’m back into the world of the computer, and I’m really to get this show back on the road. And did I mention it’s PURPLE?